To share your memory on the wall of Stephen Kennedy, sign in using one of the following options:

Provide comfort for the family of Stephen Kennedy with a meaningful gesture of sympathy.

Receive notifications about information and event scheduling for Stephen

We encourage you to share your most beloved memories of Stephen here, so that the family and other loved ones can always see it. You can upload cherished photographs, or share your favorite stories, and can even comment on those shared by others.

Posted May 02, 2019 at 06:26pm
I was fortunate to know Steve (and Bette Ann) recently for an all too brief time. We were among 23 fellow travelers who shared an fabulous trip to Australia & New Zealand in March of this year. It is seldom than at tour group is as congenial as this one was and Steve and Bette Ann friendliness were a major part of this. I remember him for his warmth, obvious love of Bette Ann and interest in all that we were seeing. He will be missed. Rosemary
Comment Share
Share via:
MR

Posted May 02, 2019 at 08:30am
Dearest BetteAnn, Jess and Meri, please accept my deepest and most sincere sympathy. I am so very sorry for your loss. Sending you warm hugs and much love.
--Massey Rausch
Comment Share
Share via: 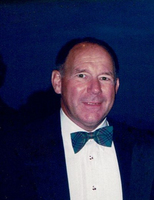