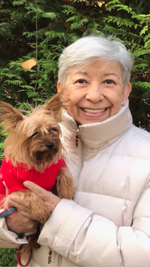 Rose King, 83, a resident of Davidsonville, MD for more than 40 years, passed away on April 12, 2019 following a courageous battle with cancer. She was born on December 21, 1935 in Quito, Ecuador and was once described as a Cosmopolitan woman due to her extensive travel and languages that she learned as a child. This included Ecuador, Peru, Brazil as well as finishing school in England.
Rose was a flight attendant with Braniff International Airways, a job she enjoyed until her marriage in 1957 when her passion turned to making a comfortable home for her husband and their five children. In the 1960s, Rose took classes in cake decorating at the Wilton School of Chicago and, once her youngest child was in high school, went into business opening Cakes by Rose. Over the next 30 years, she became a widely celebrated cake specialist whose distinctive creations even graced tables at the White House.
Rose most enjoyed spending time with her family. She also held a special devotion to the Blessed Mother and was a very active member of Holy Family Catholic Church in Davidsonville. She was a founder 22 years ago of the parish’s Tuesday night Prayer Group, Light of the New Covenant, which is still a vibrant parish ministry today.
Rose was preceded in death in 2011 by her loving husband of 54 years, David King. She is survived by her four sons, Richard King of Davidsonville, John King of Baltimore, MD, Paul (Ruth) King of Haymarket, VA and Bill King (Traci) of San Clemente, CA; her daughter, Jacqueline (Tom) Payne of Seal Beach, CA; one sister, Mary Moren of Lima Peru; 10 grandchildren, J.R. King, Zyryll Reyes, Samantha and Tyler King, Gabe Reyes, Emily, Brandon and Nicole King, Scott Payne and Kaya King; one great-granddaughter, Shay King; her beloved friend, Gladys Bravo and her faithful dog, Nemo.
Friends are invited to celebrate Rose’s life with her family at Holy Family Catholic Church, 826 W. Central Avenue, Davidsonville, MD 21035 on Monday, April 22 from 9 a.m. for a viewing and prayers until 11 a.m. when a Mass of Christian Burial will be offered. Interment will follow at Lakemont Memorial Gardens.
Since Rose’s funeral will be held the day after Easter and the church will already be adorned extensively with flowers, the family strongly encourages memorial donations be made to Holy Family Catholic Church c/o Rose King in lieu of flowers. Online condolences and tributes may be offered using the link in the left column of this page.