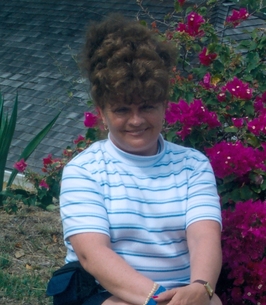 Print
Margaret Frances "Maggie" Estes, 66, a resident of Davidsonville, MD for 26 years and previously of Bowie, MD, died on Sunday, November 11, 2018 at the Anne Arundel Medical Center in Annapolis. Born on October 29, 1952 in Washington, DC to the late John Fillmore and Mary Ellen Rogers, Maggie graduated in 1970 from Parkdale High School in Riverdale, MD. She grew up in College Park, MD where she could always be found outside roughhousing with her eight brothers. Maggie worked for Bell Atlantic/ Verizon in their Calverton office for 32 years, retiring as a software analyst in 2003. Early in her career she played for the Bell Atlantic softball team. Maggie enjoyed traveling with her husband and being with her family. She had an extremely close relationship with her mother and her daughter and cherished her grandson, Tommy. She very much enjoyed attending Tommy’s various sporting events and was his biggest fan. Maggie had a selfless nature and was always helping others. She is survived by her husband, Richard William Estes whom she married on February 27, 1977; her daughter, Lorrie Lee (Roy) Dietrich of Davidsonville, MD; her siblings, John Francis Rogers of Roxboro, NC, Paul William Rogers of Port Charlotte, FL, Charles Fillmore Rogers of Homosassa, FL, Edward LeRoy Rogers of Davidsonville, MD, Mary Ellen Jones of Thurmont, MD, James Noble Rogers of Friendship, MD and Michael Joseph Rogers of South Daytona, FL and her grandson, Thomas William Dietrich. She was preceded in death by her brothers, Stephen Melvin Rogers and Robert Lee Rogers. Friends are invited to celebrate Maggie's life at the George P. Kalas Funeral Home, 2973 Solomons Island Rd., Edgewater, MD on Monday from 2 to 4 and 6 to 8 PM. Mass of Christian Burial will be offered at Holy Family Catholic Church, 826 W. Central Ave., Davidsonville, MD on Tuesday, November 20 at 11 AM. Interment Lakemont Memorial Gardens in Davidsonville. Condolences may be made by clicking the link on this page.

We encourage you to share any memorable photos or stories about Margaret. All tributes placed on and purchased through this memorial website will remain on in perpetuity for future generations.

SL
TO THE FAMILY. Although I did not know Margaret, I just wanted to tell family and friends how sorry I am for their loss, please accept my deepest sympathy. Please know that your family will be in my prayers 2nd Corinthians 1:3,4.
S LEWIS - Wednesday November 21, 2018 via Condolence Message
Share This:

Love you and miss you so much. Mike and Debbie, Tony and Danny
Sunday November 18, 2018 via Heartfelt Sympathies | Order flowers in memory of Margaret
Share This:

Our warmest condolences... Please know our thoughts and payers are with you and your family during this difficult time.
Love! Jeff & Cathy Williams - Sunday November 18, 2018 via Heartfelt Sympathies | Order flowers in memory of Margaret
Share This:

You are in my thoughts always.
Charlie - Sunday November 18, 2018 via Heartfelt Sympathies | Order flowers in memory of Margaret
Share This:

Forever in our hearts. With the deepest of sympathy.
Connikins, Karl, Ashley, and Cassidy - Sunday November 18, 2018 via Heartfelt Sympathies | Order flowers in memory of Margaret
Share This:

Jenny and Family, So sorry for your loss. I know your Aunt meant the world to you. I'm sure she is resting peacefully in heaven - Bill
Saturday November 17, 2018 via Heartfelt Sympathies | Order flowers in memory of Margaret
Share This:

GB
Rick, Lorrie, Roy, and Tommy,
We are so sorry to hear about Maggie. You are and always will be in our thoughts and prayers. All those wonderful memories will get you through the days to come. Please let us know if there is anything we can do. Love you, Greg and Rose
Greg and Rose Bird - Friday November 16, 2018 via Condolence Message
Share This:

K
I’m so sorry for your recent loss. My deepest condolences to your family. Death of a loved one is never easy to endure, but you don’t have to go through it alone. Continue looking to God and you will always find comfort in him (2 Cor 1:3,4). He will soon destroy the enemy of death (1 Cor 15:26), and He will soon return our loved ones to us through the resurrection (John 5:28,29). Please visit JW.org and search “When Someone You Love Dies”, it helped me through some difficult times and I hope you can find comfort in it also.
Kim - Friday November 16, 2018 via Condolence Message
Share This:

MW
Richie, Lorrie and family
So sorry to hear of your loss. Maggie was so kind and thoughtful. I know Richie how much Maggie meant to you! Our thoughts and prayers are with you.
Much Love
Your cousin Margaret "Maggie" Wade and Keith Wade
Margaret "Maggie" Wade - Friday November 16, 2018 via Condolence Message
Share This:

TH
Paul and family,
We are so sorry for your loss. This is happening far too much in our families. Thoughts and prayers to all of your family.
Love
Terry & Marty
Terry & Marty Harper - Thursday November 15, 2018 via Condolence Message
Share This:
1 2 next page >>
Page 1 of 2
Share
×