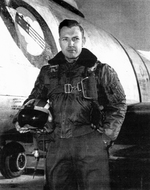 James R. Cumberpatch, Colonel, USAF (Ret) passed away on April 28, 2017 at his assisted living facility in Harwood, MD following a brief illness. Born on June 8, 1922 at the Fort Sam Houston Army General Hospital in San Antonio, TX to the late James T. and Louise K. Cumberpatch. His father, a career Army Air Corp officer, earned his pilots wings in 1917. James followed in his footsteps, attending the U. S Military Academy at West Point and graduating on June 6, 1944, part of the 'D-Day Class.' After graduation he was trained and qualified to fly B-24 bombers. Before he could be assigned duty in Europe, he was sent to B-29 training. He completed B-29 combat crew training as an airplane commander and was assigned to the 93rd Bombardment Squadron on Guam. Shortly after his arrival on Guam, in July of 1945, the War in the Pacific ended. Later he was adjutant of the 31st Air Service Group, 314th Bomb Wing, 20th Air Force, Guam. In 1946 he was transferred to the Operations Division of the 5th Air Force Headquarters, Nagoya, Japan. On returning to the States, he attended the Georgia institute of Technology where he received BS and MS Degrees in Aeronautical Engineering in 1949 and 1950. Subsequent tours of duty included assignments as a project engineer in the Jet Fighter Branch at Air Material Command HQ in Dayton, OH and Chief of the Production Branch in the Office of the Air Force Plant Representative at the Lockheed Aircraft Company in Burbank, CA. During this assignment he flew over 250 acceptance test flights in factory new T-33 and F-94C jet fighters. In 1953 he graduated from the Jet Fighter Command Gunnery School at Nellis AFB, NV, was promoted to Major and then served in Korea as the Executive Officer of the 336th Fighter Interceptor Squadron (The Fabulous Rocketeers), 4th Fighter Wing at the Kimpo Airbase flying combat missions in the F-86E Sabre Jet. Returning stateside, he attended and graduated from the Air Command and Staff School at Maxwell AFB, AL, in 1955.
In 1956 he was assigned as Chief of the Plans and Management Office, Production Directorate, Sacramento Air Material Command. From 1957 to 1959 he served as Assistant Chief of Staff of this command which consisted of 27,000 military and civilian personnel. He was then selected to be an Alfred P. Sloan Fellow at the Massachusetts Institute of Technology, in Cambridge, MA where he received an MS in Industrial Management. From 1960 -1963 he was assigned to the Office of the Secretary of the Air Force, Washington, DC, as an Air Force Liaison Officer with members of the U. S. Congress. He was promoted to Lt. Colonel in 1963 and served as Assistant Executive Officer to the Deputy Chief of Staff, R & D, USAF, at the Pentagon. In 1964 he was promoted to Colonel and was the Director, Command Secretariat of the Air Force Systems Command at Andrews Air Force Base, MD. He served in that position until he retired from active duty in 1968. He was awarded the Army Commendation Ribbon and three Air Force Commendation Medals. After retiring from the Air Force he worked as a Production Manager for Garrett AiResearch in Torrance, CA. Next, he became Executive Vice President of Program Control Corporation, a software company, where he directed the development of the 'Mark III' project management computer software, one of the first successful project management computer systems introduced in the 1970's. He then founded Decision Technology Corporation, a project management consulting firm specializing in the design and implementation of project management methodologies, development and implementation of project management policy and procedures, software development, and in-house project management seminars and executive briefings. He personally conducted several hundred seminars, across the United States, Canada, Mexico, and Saudi Arabia. Clients included Fortune 500 companies, government and DoD agencies, and ARAMCO, in Saudi Arabia. He fully retired in 1996. Col. Cumberpatch was a member of the Army-Navy Club, The Order of Daedalians, The Quiet Birdmen, the Lost Patrol, the Sabre Jet Association, and the West Point Association of Graduates. He served many years on the Advisory Board for the Centers for the Handicapped, in Silver Spring, MD. He was an avid rail roader, always building layouts and tinkering with 027 gauge Lionel model trains. He is survived by his children, John (Paige) Cumberpatch of Sherwood Forest, MD, Michael (Lynn) Cumberpatch of Annapolis, MD, Mary Louise (Robert Durbin) Cumberpatch of Kensington, MD, Thomas (Lisa) Cumberpatch of Annapolis, MD, Mark (Sharon) Cumberpatch of Murrells Inlet, SC and Joseph Cumberpatch of Silver Spring, MD; his grandchildren, Lily, Kate, Chris, Liz, Jody, Colleen and Ian Cumberpatch and Clara and Patrick Durbin. He was preceded in death by his first wife, Mary O. Cumberpatch, and his second wife, Eloise Mahon Cumberpatch. His oldest son, James R. 'Rick' Cumberpatch was killed in Vietnam June 23, 1966, while serving as a combat medic with the 1st Air Cavalry Division. Memorial services and inurnment will be private. Donations, in his memory may be made to the "Cadet Activities Fund (DCA)" of the West Point Association of Graduates (https://www.westpointaog.org/GiftsInMemory).
Condolences may be made by clicking the tab on this page.