In Memory of
Donovan Michael
Dearing
1983 - 2018
Click above to light a memorial candle. 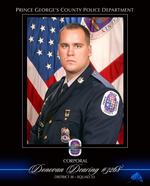 Donovan Michael Dearing, 34, a 14-year resident of Anne Arundel County, passed away on June 8, 2018 after a courageous, 3-year battle with esophageal cancer. Born on October 18, 1983 in Michigan, Donovan felt the call to serve others at a young age. He graduated from high school in 2002 and joined the U.S. Marine Corps. He was deployed to Operation Enduring Freedom in Afghanistan and was proud to have served his country. After receiving an honorable discharge in 2006, Donovan continued his legacy of service, this time to his community, by joining the Prince George’s County Police Department where he rose to the rank of Corporal and served with distinction as a Field Training Officer. He was a member of the Fraternal Order of Police Lodge 89.

In his spare time, Donovan was both an avid hockey player and fan. He was a forward (#91) for the Laurel Sharks hockey team, scoring 133 points in 124 games, and he followed the Capitals with a passion. He also enjoyed camping and fishing.

Friends are invited to celebrate Donovan’s life with his family from 1 to 3 and 5 to 8 p.m. on Thursday, June 14 at the Kalas Funeral Home, 2973 Solomons Island Road, Edgewater. A funeral service will be held at 11 a.m. on Friday, June 15 at Holy Family Catholic Church, 826 W. Central Avenue, Davidsonville. Burial will be private.

In lieu of flowers, donations may be made to a Go Fund Me Memorial Fund to benefit his children. https://www.gofundme.com/8-donovan-dearing-memorial

Online condolences and tributes may be offered by accessing the link in the left column of this page.