To share your memory on the wall of Dolores Schraf, sign in using one of the following options:

Friends are invited to celebrate Dolores’ life with her family on Thursday, December 20 from 4 to 7 p.m. at the Kalas Funeral Home, 2973 Solomons Island Road, Edgewater. Mass of Christian Burial will be offered on Friday, December 21 at 10:30 a.m. at Holy Family Catholic Church, 826 W. Central Avenue, Davidsonville, MD 21035. Because burial is being scheduled privately at a later date, the family would appreciate donations in Dolores’ memory to Holy Family Catholic Church in lieu of flowers.

Online condolences and tributes may be left by accessing the memory wall link.
Read Less

Receive notifications about information and event scheduling for Dolores

We encourage you to share your most beloved memories of Dolores here, so that the family and other loved ones can always see it. You can upload cherished photographs, or share your favorite stories, and can even comment on those shared by others.

Kerry & Mitzi McConville, Sally Hartnell, and other have sent flowers to the family of Dolores Schraf.
Show you care by sending flowers

Posted Dec 18, 2018 at 06:44pm
Jamie, Kathy, and Rick,
Dolores, Mom, will always be remembered as a kind and gentle person with a beautiful smile. Our hearts go out to you. Love Jake and Tracy

Posted Dec 18, 2018 at 05:10pm
Great Aunt Dolores Schraf brought so many gifts to our life. We will never forget her. May your heart and soul find peace and comfort. 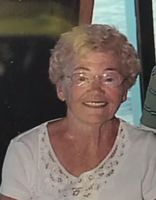